***Purchased Online Tickets will be available at the Box Office (Will Call Window), which will open at 3 pm, one hour before the performance. Online ticketing is now closed. You may purchase tickets at the Box Office starting at 3 pm tomorrow, on Concert Day.

The Philharmonic Orchestra Performs Gershwin, Liszt and Rachmaninoff on the eve of their 2022 International Concert Tour to the Baltics!

Come see the talented young musicians of the orchestra perform in their very last concert of the season before they embark on their 2022 International Concert Tour to the Baltics! Their travels will lead them to perform in great concert halls, starting with  the Compensa Concert Hall in Vilnius, Lithuania; sightseeing in Riga, Latvia; the great Concert Hall in Pärnu and the Academy of Music Concert Hall in Tallinn, Estonia; ending with their final performance  at the world-famous Church of the Rock in Helsinki, Finland!

Performing the tour repertoire, the  orchestra will open with Gershwin’s entertaining and swing-influenced Strike Up The Band Overture, and will close the concert, performing Sergei Rachmaninoff’s last major work, his Symphonic Dances, with movements ranging from vibrantly energetic and exciting, to the most beautifully lush. This concert will also feature soloist, Solomon Ge, a rising young pianist and composer from San Jose, who has won numerous competitions already at his young age, both as a pianist and as a composer. 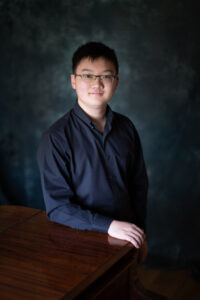 Solomon Ge is a pianist and composer from San Jose, CA. He currently studies piano with Prof. Yoshikazu Nagai at the San Francisco Conservatory of Music.

He has performed with the Minnesota Orchestra, Peninsula Symphony, Palo Alto Philharmonic, Round Rock Symphony Orchestra, California Youth Symphony, and will perform with the Nova Vista Symphony. He has also participated in the 2018 and 2019 Amalfi Coast Music and Arts Festival in Italy and the 2019 International Maestro Piano Festival in Taipei, performing in masterclasses for Dang Thai Son, Boris Slutsky, John Perry, Ilana Vared, Jerome Lowenthal, Boris Berman and Chun-Chieh Yen.

As a composer, he has won the 2018 CMS Young Composers Competition, was listed as an Emerging Artist in Tribeca New Music’s Composition Competition and was a finalist in the 2018 NextNotes Composer Awards. He premiered his own work, “Astral Mirage” at the 2019 International e-piano Junior Competition.