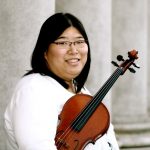 Violist Christina Wong has appeared in solo, chamber, and orchestral performances throughout North America, Europe and Asia. A native of San Francisco, Ms. Wong started her musical education at a young age and was a student at the San Francisco Conservatory of Music Preparatory Division and the Golden Gate Philharmonic. Since then, Ms. Wong has been a member of and held principal positions in orchestras including the South Bay Symphony, Erie Philhamonic, Youngstown Symphony, Ohio Valley Symphony, CIM Orchestra, Juilliard Orchestra, and San Francisco Symphony Youth Orchestra. These opportunities have allowed her to work with esteemed conductors James Conlon, Michael Tilson Thomas, Stanislaw Skrowaczewski, Pierre Boulez, Marin Alsop, and Otto Werner Mueller, among others.

An advocate for music education and outreach, Ms. Wong has held a private teaching studio for over 10 years and has been on faculty at the Golden Gate Philharmonic, Cazadero Performing Arts Camp, Coda Mountain Music Camp in West Virginia, and California Summer Music in Pebble Beach. Since 2012, she has been a teacher with Music Team SF, an El Sistema inspired program reaching youth in underserved communities.