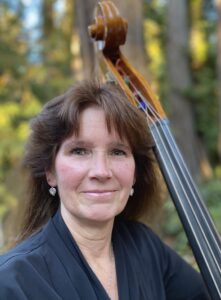 Christy Crews was born and raised in Palo Alto California, where she was quite active playing music with the Palo Alto Chamber Orchestra, El Camino Youth Symphony, and various instrumental and vocal ensembles at Stanford University prior to graduation from Palo Alto High School.

Ms. Crews returned to the Bay Area to be Principal Bass in the Carmel Bach Festival before joining the Marin Symphony.  Shortly thereafter, she became a longtime member of the Monterey Symphony, and Principal Bass of West Bay Opera and the Fremont Symphony.

Ms. Crews teaches private students, and has coached students in sectionals and chamber music groups with Palo Alto Chamber Orchestra,  El Camino Youth Symphony, Peninsula Youth Symphony, Monterey Youth Symphony and Peninsula Symphony. She was also a music teacher for many years in all of the elementary schools of the Los Altos Unified School District, as well as at middle and high schools in Palo Alto.