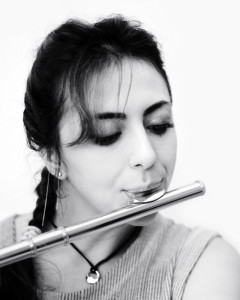 Born in Tashkent, Uzbekistan, Gala is the product of classical Soviet training and education. She began playing at the young age of nine, and by thirteen was accepted into a special music school for gifted children. At the age of sixteen, she joined her first philharmonic orchestra and at seventeen, became a member of the prestigious orchestra of the countries national opera. During her tenure at the Tashkent State Conservatory, she won a number of regional and national flute competitions and participated in both local and European performances. In addition to these successes, she was able to earn her degree in Performing Arts. Soon after graduating, Gala began her journey to the United States.

Upon her arrival in 1997, Gala commenced her teaching career. By applying her classical training and technique to her lessons, she has seen many of her students go on to succeed in their own musical endeavors. Some of these include high scores on CM tests and award winning performances at various competitions (Junior Bach Competition, SJYS Concerto Competition, Avaloni Music Competition, US Open). All of her pupil’s leave her studio with the ability to execute both classical and modern pieces and a solid understanding of music theory. Gala is a member of Music Teacher Association of California (MTAC) and National Flute Association (NFA) Aside of the advanced technical aspects to her teaching, the zest she has for her art, she shares with students. This enables them to develop a connection with her, the instrument, and the music.

In addition, Gala’s energy and passion for music have allowed her to establish a unique bond and rapport with her student’s, past and present.