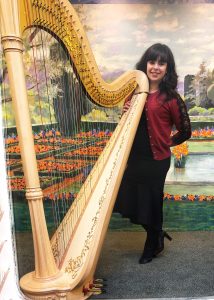 Kristal Schwartz is an experienced educator, harp entrepreneur, dynamic harp ensemble director, and freelance performer with over twenty-five years of performing and teaching achievements. She graduated in 2007 Masters Degree in Performance (with Honors) from the San Francisco Conservatory of Music, as well as a Bachelor’s Degree in Music Performance from Thomas Edison University, 2005.

Ms. Kristal is a dedicated teacher who brings out the best in her students by concentrating on the individual details that produce an excellent performer.  Her greatest joy is to see her students take flight. Ms. Kristal maintains a large thriving private studio in the Bay Area with over 30 students from beginner through professional levels.  Her students performed at the 2018 American Harp Society Institute, get accepted to SFCM Pre-College, place and win competitions such as the Yvonne La Mothe Schwager, ASTA, SJYS and National Harp Competitions. Many of her students have gone on to work as a professional harpist, or major and minor in harp. Yearly, Ms. Kristal presents a community harp outreach concert featuring her students collaborating with professional musicians.

In 2008, Ms. Kristal, began building the first K-12 harp program in Northern California at Valley Christian Conservatory. She fosters harp-awareness in many schools such as Clark Elementary School, Harker, Mitty, Saratoga High School, and many more.

Ms. Kristal  is well known as the director and founder of the San Jose Youth Symphony’s Harp Ensemble. It is a pre-professional ensemble known for stunning performances, pioneering electric harp with traditional concepts. The ensemble performs Ms. Kristal’s  own arrangements of contemporary and electroacoustic harp ensemble pieces as well as collaborative pieces of new and emerging composers and arrangers from around the world.