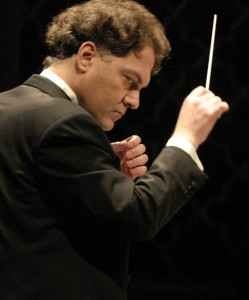 Versatile and highly acclaimed conductor Yair Samet enjoys a widespread international career spanning three continents. He is consistently praised for his high level of artistry and exceptional knowledge of the repertoire.

Mr. Samet has conducted the famed Sinfonia Varsovia on tour in Germany, the Belgrade Philharmonic in Serbia, the Saarländisches Staatsorchester in Saarbrücken, Germany, the Guangzhou Symphony Orchestra in China, Orquestra Sinfónica de Chile in Santiago, and the Sarajevo Philharmonic in Bosnia. In Israel, he conducted the Haifa Symphony, the Rishon Le-Zion Symphony Orchestra, and the Israel Sinfonietta. He has conducted performances in the Rudolfinum Concert Hall in Prague, the Mozarteum Hall in Salzburg, the National Symphony Hall in Dublin, Teatro el Círculo in Rosario, Argentina, the Granada International Music Festival in Spain, among many other performances world-wide. In addition, he conducted the Tampere Philharmonic Orchestra and the St. Petersburg Glinka Capella at Finland’s Tampere International Music Festival.

In addition to his professional conducting accolades, Mr. Samet also served on the music faculty of the University of California Santa Cruz as principal guest conductor, leading the UCSC Symphony Orchestra in concerts annually. Currently he is also serving as guest conductor with San Jose State University’s orchestra.

Born in Jerusalem, Yair Samet attended the Rubin Academy Music Conservatory and High School of Music and Arts where he studied piano and bassoon, and was invited as the institution’s youngest student to join the composition department under the guidance of internationally renowned composer Mark Kopytman. Mr. Samet performed frequently as soloist and chamber musician throughout Israel and for Israeli National Television.

Yair Samet was the recipient of three scholarships from the American Israel Cultural Foundation. He began his formal orchestral conducting and musicology studies at Tel-Aviv University during which he founded the Young Israel Chamber Orchestra, a group he led for four years. Mr. Samet made his professional conducting debut in his early twenties with the Rishon Le-Zion Orchestra, as finalist of Israel’s International Course for Conductors under the direction of Maestro Noam Sheriff.

Having earned a national reputation as a gifted young conductor and musician, the Young Israel Philharmonic, a wing of the famed Israel Philharmonic, created the position of assistant conductor for him in 1989. Mr. Samet completed his graduate studies in Orchestral and Operatic conducting and composition in the United States at Indiana University where he directed the Indiana University String Orchestra and conducted each of the University’s five orchestras.